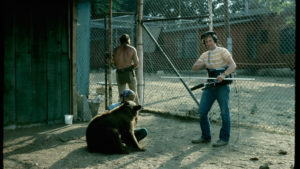 Original Broadcast: 11/28/2017. For over a hundred years, movies have been synonymous with entertainment. But outside of the film industry, few people really understand how they are made, and especially how the best movies engross us through careful attention to good storytelling, encoded in dialogue and images, and, less obviously, sound. Joining us in Episode Six is Bobette Buster, a screenwriter and film producer who has also worked as a story consultant with major studios such as Disney, Pixar, and Sony. Bobette has just been appointed Professor of the Practice of Digital Storytelling at Northeastern.   The image for this episode is the recording Pooh-the-bear, who loved bread soaked in milk and would vocalize mightily when presented with it. Voila! The voice of Chewbacca was born. To learn more about Chewbacca’s voice and other movie sound design, check out Bobette’s feature-length documentary, Making Waves: The Art of Cinematic Sound.